Runelite is a roguelike where you play as a Runecaster, a mage capable of crafting spells by evoking the power of the runes they carry on them.  You've found yourself trapped within an ever changing tower full of danger and treasure while searching for a rune of great power, that hopefully will be your way out.  Will you be able to find the legendary Portal Rune and escape?

The Demo includes: 7 Dungeon Floors, 9 different runes, over 40 enemies, and 20 perks.   Disclaimer: This is an early build, if you encounter any bugs please let me know.  Many aspects are not balanced, so expect changes in the future!

WASD : Movement.  Moving into an enemy will attack, or into a door or chest to open.

Z :  Target Spell/Cast Spell.  Must have at least 1 rune evoked. Press once to begin aiming, move cursor to target and press again to confirm.

E: Equip item.  Must be standing directly on top of it.

Mouse:  Hover over to view tooltips of enemies and items, and to select perks from Tomes.

Click tiles adjacent to you to move/attack/interaction with them.

Click runes to evoke them, then right click to begin or cancel casting.  While casting click a tile in range to cast the spell on it.

Click the equipment slots(weapon/armor/accessory) to pick up an item you are standing on, and click on the consumable slot to use a consumable you are carrying.

Items & Some Monsters done by https://twitter.com/ChrisMillerArt

The first 4 runes are elements.  Stacking multiples of the same cause their effects to become strong and deal more damage.  Fire and Ice gain range and aoe, Lightning gains even more range but no aoe.  Poison starts with more aoe, but deals damage over time.  Mixing any of these together will produce chaos instead.  The Force Rune: deals no damage and adds a knockback effect to anything its paired with.

Project Rune: which adds alot of range to the spell but turns it into a projectile so a direct path to the target is needed.

Leap Rune: Causes your wizard to move to the targeted tile ignoring enemies and obstacles in the way.

Beam Rune: Modifies the spell to strike a line of tiles.  Can be sustained for 2 additional turns by skipping your turn (Space Bar).

Bounce Rune: Like project except the spell will ricochet off targets nearby.

Fun game but I noticed the browser edition didn't save the classes I unlocked. I refreshed without even closing out and i could only be the red wizard. Also if an item spawns on the stiars it becomes impossible to pick up. Otherwise fun game

Im glad you enjoyed it, despite the jankyness :D  I would like to eventually return to this someday

oh, this floor 2 has no stairs! darn.

Occasionally stairs will spawn where the wall overlaps the floor which can make them hard to see.  I'll make sure stairs have more stringent spawning rules next update so theyre always present and obvious

also, when i am casting and click a spot I cant cast at, it casts it at me and I usually die.

just encountered a floor with no stairs anywhere! this seems to be exceedingly rare, but very frustrating!

also, armors that say they give you health take it away, and vice versa

nevermind, for the armor it's just a case of confusing mechanics- it seems like they give you health, and heal you up to that health, but then take away an equal amount to what you gained.

oh yea, thats a quirk of the way the HP bars update.  The armors increase you max life, but not your current, so the hp bar automatically shifts down cause the new % is technically less despite being the same hp.  That will def addressed in a future update. Sometimes very rarely the stairs can spawn behind a place where the top of the wall overlaps the walkable area so its hard to see (which is still a problem), I will try to look into if there is a case where they could fail to spawn though.

unfortunately it seems like there's a glitch where many items I hover over display my player stats,  and not the item or what it does

Published a quick update to fix this and added a few things along the way!

thanks! Yea some situations are very... lethal in Runelite lol.  Try to start battles at max distance with a spell first :D

Already noticed that getting to fire your spell needs at least 2 turns, and during this you should avoid line of sight with certain enemies. xD

great game but objects can spawn a block you in also anything above a wall is hard to see. lots of fun keep it u

Thanks! You can actually destroy or push objects with spells!  The walls definitely do obscure alot and I need to work on that.

Amazing new update, just a some things I noticed.

Thank you, and thanks for such detailed feedback that is extremely helpful!  For evoked rune tooltips the plan was going to be to have a single tooltip that shows the complete effect the spell would have with those runes, but I hadn't considered the fact there are ways to evoke runes you dont currently have, so maybe I'll need both types of tooltips.   How do you feel about enemy stats (HP, dmg, abilities, etc) being revealed in their tooltips  as you kill more of them?  Would you rather have everything up front or learn about them as you play?  With Static, did the downsides (randomly hitting undesirable targets like chests and torches) not feel like they off set the kiteability it provides?  Lightning actually doesn't scale in AoE with more lightning evokes!  So it might be even worse than previously thought lol.  There will be some more interaction that havent been implemented yet that should help differentiate them more, but I am definitely going to test lightning specifically more for feel.  Thanks again, making alot of notes :D

Personally, I prefer info up front. Static discharge is a real mixed bag, getting toasted by torches was pretty brutal actually.

Thanks man!  I was considering different severities of shake on the enemies based on damage, but didn't know how to scale that at the time.  I think giving feedback for damage is the toughest thing, cause I'd really like to avoid floating numbers.  Maybe a dmg/power indicator on the spell itself and then some way to examine monsters or a compendium... hm.  Maybe one day :D

Spellcrafting is always fun but I don't fully understand it in this case.

It doesn't feel very rewarding to experiment with spells.

I can't see my damage, nor enemy health, and only way to make any estimates is to use spells on enemies.

Because it's very easy to die, and dying means restarting, it would be too risky to experiment later on.

So the only reasonable way to play, to me at least, is to experiment in the very beginning and then sticking to what works.

Also most combinations seem to be aoe and knockback, aoe seems near worthless because  2 half health enemies are always more dangerous than 1 full health enemy and most knockback spells are too random/weak to actually get any distance in.

So I ended up playing with only preloaded triple lightnings, as they oneshots any enemy except skull head snakes, from a good distance. Other spells seem pretty pointless in comparison, and if there is use for them in lategame, I wouldn't know it because experimenting = risking having to replay the previous levels.

I like the art, especially the pc and the map.

Thanks for playing and taking the time to reply!  I agree there isn't much incentive to diversify your play style currently.  I had planned resistances on enemies to force that abit but didn't have time.  Also a tooltip on each rune to say how it affects the outcome (for instance force, the white rune only adds aoe & knockback but no dmg, where as stacking multiples of one of the elements deals more damage.)

The spell mixing is really fun! 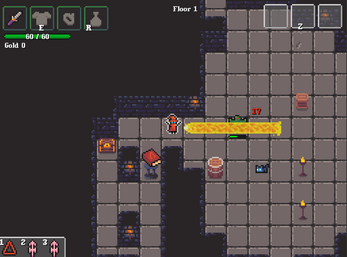 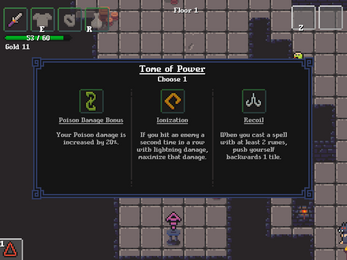 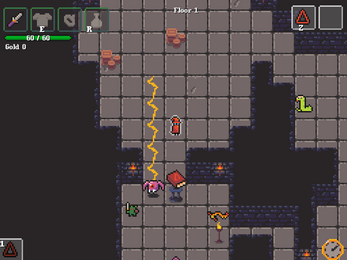